TODAY ON VOICES RADIO: Support KPFK by getting a copy of Bus Riders Union

Support KPFK by getting a copy of Bus Riders Union

Today on our program, Voices from the Frontlines on KPFK 90.7 FM at  3 PM, you have a great opportunity to support KPFK, to honor a great film-maker Haskell Wexler, and to get an amazing one-time premium, the DVD of the great documentary Bus Riders Union! Today Eric Mann and Channing Martinez will be offering a great premium for KPFK listeners sponsoring our fund drive—for a gift of $200—a DVD of Haskell’s great film. This film always sells for $200 to individuals and groups to honor all the time and money Haskell invested in 3 years of his work on this film and to encourage institutional purchases and group film showings.

Bus Riders Union, in our view, is one of the best political documentaries you will ever see. It tells the story of our organization, The Strategy Center and our lead organization for 20 years, the Bus Riders Union in its successful civil rights campaign against the transit racism of the Los Angeles MTA—covering the period of 1997-2000.  What Haskell managed to achieve, as a revolutionary cinematographer and film maker, with the great help of a wonderful film editor, Joanna Demetrakas, is to bring a vital and explosive social movement alive on the screen in living color. Bus Riders Union covers 3 years in the life of a social movement and over 80 minutes, captures the protracted nature of what it means to win major demands against a far more powerful enemy. In the end the BRU won 2500 Compressed Natural Gas buses, 1 million in new service hours, and dramatically reduced bus fares here in L.A.—the auto capital of the world. But it also shows movement organizers as compelling historical figures, film stars in a far larger galaxy of other film stars, that is, grassroots organizers playing themselves. We see Rosalio Meniola, a room service waiter at the Beverly Wilshire and a veteran of the PRD in Mexico, in a brilliant story within the story, “The Ballad of Rosalio Meniola” with a wonderful soundtrack composed by Greg Landau. Eric Mann, a lead organizer of the campaign and veteran of the civil rights and anti-war movement in his Armani suits taking on the real suits of the political establishment with a great exposure of the vacillations and duplicities but also humanity of Mayor Richard Riordan, Yvonne Braithwaite Burke, who in the end, worked out an agreement with the BRU. There is Kikanza Ramsey, a force of nature throughout the film with her youthful, fresh, enthusiasm and will and Della Bonner, the larger than life resident of Watts and her fateful punchline and warning to the MTA at the end of the film’s victory, “Remember, this is just a down payment, and we have to mobilize and organize to win everything that we deserve.”

In watching the film two weeks ago at the Pan African Film Festival, I was struck by as many times as I had seen the film (more than 100) I had not fully grasped it brilliance as a film because I was so impressed with it as a gift to our organizing work. But through its rejection of a “voice of god” narrator to let us narrate our own story through direct speech to its loving depiction of LA as a city of color and a multi-racial, movement with so many Black and Latino heroes, it bridges the work of the 1960s to the challenges of today. Is rare than a film can end with such profound hope and optimism that is rooted in a real struggle in the real world. Please tune in to Voices from the Frontlines today at 3 PM, 90.7 FM and streaming on the web at KPFK.com and then call in your $200 contribution to 818-985-5735. Let’s make this a great victory for KPFK, Voices from the Frontlines, the Strategy Center and the Bus Riders Union, and the continuing legacy of Haskell Wexler, who passed in 2015 but whose love and legacy lives on through his work and so many people who loved and love him.

Voices Radio: In conversation with Hollis Watkins, at the 50th Anniversary of Mississippi Freedom Summmer 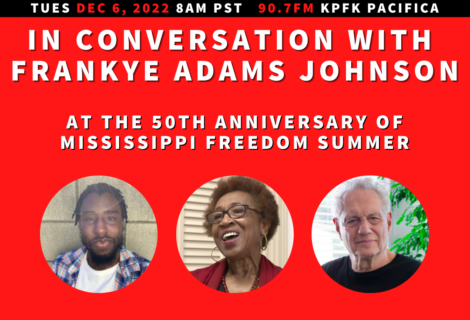 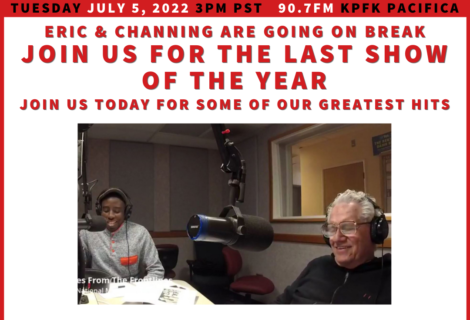 Voices Radio: Channing and Eric are going on break, Join us for a final show of the year Today at 3pm PST